PS: Hey does anyone need to type Pre-Script? anyways… Why didnt Preity Zinta fall in love with Jadoo in KMG? coz it could not perform anything without DHOOOOOOOOOOP….. 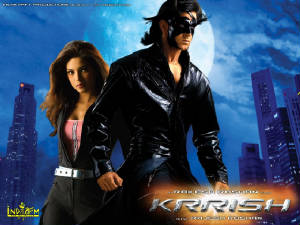 What would happen if u take all the powers of hollywood superheroes, grind properly, make a cock-tail and feed it to Hrithik Roshan, Undoubtedly you will get our own desi superhero-Krishna err… KRRISH.. who can fly like superman, swing like spidey, jump like hulk, fast as callisto(x-3),climb trees like tarzan, bash the baddies like neo.. the list goes on

So, now it is about 20 years since JADOO has gone back to his home. Due to some incident, lets say, X, Rohit Mehra and his wife are no more. But have a son Krishna for whom ‘legacy is passed’, now with extra power. When Rekha realises about this, takes him to a village and starts fresh life. Here, comes the Hrithik part-2 in his pyjamas and a top(name left to one’s imagination), sleeveless, t-shirt,banian whatever… they still remain dirty though his grandma uses abundant amount of tide to wash clothes. Now, enters Priyanka Chopra in a glider…. and need not say, our hero saves her from a deadly accident. What would you do if you see someone like Krrish? Your curiosity just does not end up by taking some videos of this guy. Special effects used in the crap ‘Kalicharan-Lalcharan’ story did not have any effect on the normal audience. Hrithik also plays Volleyball… but how? Serve: He throws the ball up… agreed, jumps…agreed, hits….agreed, Ball tares the volley-net…agreed, goes some 100 meters..agreed, hits a rock…agreed, bounces…agreed, rock develops visible cracks but the ball is still round…agreed!!!Roshans did not spare Rajnikant too… and now, our hero is in love but priyanka has to leave to singapore after her camp.
Since chopra is late to her office back in singapore, she is loosing her job and wants a documentary on this ‘talented guy’ of India to protect her job. When krishna wants to go to singapore and get his love back, rekha recites X…. His dad Rohit had been to Singapore for creating a computer which can predict future for our villain-nasaruddeen shah. In the meantime he was killed in a fire in lab… But actually this is only X/2. The other part is later. Wait a minute…. Rohit was away from his home for 2 years when krishna was born!!! So, Preity zinta… Whats going on????(Salaam Namaste, remember)

In singapore, our hero starts doing some jackie-chan also in the middle of road. Here is the making of superhero…The couple goes to a Circus… The people who had come to see circus are more amused of ‘Dil Nadiya’ and forgot why they were there …. may be because majority of them were Indians. Saves some kids from the fire that breaks out and becomes every child’s favourite instantly. Krrish sooner comes to know that Priyanka actually fooled him on the topic ‘love’ and is ready to go back… and bang!!! He comes to know the rest X/2. His dad is alive!!!

When Rohit had built the computer (You can see your death in the computer with dts quality audio and also with superb quality videography…again in filmi style)single handedly, he comes to know his boss is a bad-guy and destroys it. But he had to be kept alive since he himself will be the password if it is built again… Guess what the passwords are for this ‘Minority Report’ kind of computer? his retina and Heart-beat… Gosh.. I really didnt know about uniqueness of everyones heart-beat. So, Rohit is kept under very ‘tight’ security in some island, his mind working but not body, one more Minority report fundaa. Now, Krrish after knowing that his father whose legacy has been passed on to him, could not save himself from the hands of normal mortals, starts chasing Nasarudden shah’s Helicopter… Seriously, I did not understand the trajectory of Helicopter and Krrish for a single moment.. Who was chasing whom???? Krrish enters tight-security zone…. mind you it is very tight…because there are morons in their tribal dress fighting with something like sword and there is a single pistol in the island. Again you wont understand x,y and z coordinates of krrish who beats the bad-guys black and blue…. Here he was a Mithun Chakraborty rather…The single pistol had a success rate of 33.33% with 3 fires and 1 death. N. Shan was unsuccessful in do-that-else-your-love-will-die style of bollywood.

Climax-Krrish is back to his grandma with ek-ke-saath-ek-free offer of her son and his love. Rohit now sits on his comp err… his dad’s and pings Jadoo…and jadoo replies instantly…. No Cable, No Internet… New era of IMs… Though the computer can only send om.. om.. om.. om, as for now, further developments will surely be a breakthrough. So all those at Yahoo, Gtalk, Skype, AIM and ICQ better get ready for this or opt to follow MSNs ‘The Road Ahead-Philantropy’ policy.

Though the use of strings in action sequences look cool… they could not make upto hollywood standards with Hrithik…And if Roshans produce yet another sequel …. what extra powers will rekha’s greatson will possess remains the question. Rajesh roshan’s music was upto standard… his standard. Rakesh has used abundant brand ads including Siyarams, Tide, Vicks, Hero Honda, Karizma, Lays. The film which cost 50 Crores already made double of it within 10 days of release.